Fall soccer has started and I am one of the countless parents lining the sidelines watching their child play.  As a therapist/trainer I see the game from a few angles: soccer is a great sport for aerobic fitness, repeatedly kicking a ball can wreak havoc on a child’s body however. At a recent game I watched as my son and an opposing team player both went after and kicked the ball at the same time. The ball didn’t move. Watching my son limp away I knew he had injured his MCL (medial collateral ligament/knee). 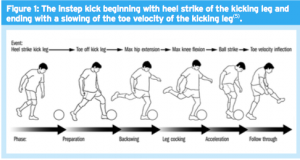 When a player kicks a ball large muscular forces are generated throughout the pelvis, hip and leg. These forces can lead to muscle strains and tendon injuries. The impact of the foot striking the ball not only moves the ball: some of this force is also experienced in the bone growth plates as well as joint structures like ligaments, knee meniscus, and cartilage.

Considering that children are still growing and have open growth plates as well as loose ligaments, the repetitive stress of kicking a soccer ball can predispose a child to a more serious ligament or joint injury. I have performed joint tests on my son’s ankle and knee during the soccer season, his right (dominant kicking leg) knee and ankle was looser compared to the left. A balance test also confirmed poor proprioceptive control of the right leg. Even though there wasn’t a singular event of a ligament sprain, poor balance/proprioception is a direct result of ligament injury.

While I don’t have research to back up my claim I would speculate that non contact ACL injuries to the dominant kicking leg could be the end result of the repetitive ligament stress and associated proprioceptive changes due to the repetitive strain of kicking.